Skip to content
Contact Us
Take Your First Step on the Path to Optimum Health!
Join Now 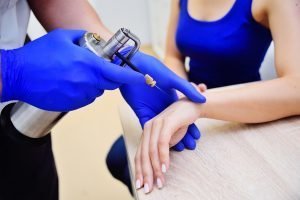 Cryotherapy is a standard treatment for warts that can be performed in a doctor’s office. Warts are small, fleshy skin bumps that develop after the human papillomavirus (HPV) enters the body through a break in the skin, such as a cut or scratch. The resulting infection causes cells on the outer layer of skin to grow and divide very rapidly. Over time, the excess cells may accumulate and form a wart, which may be flat and smooth or bumpy and rough-textured. Warts often grow on the hands (common warts) or the feet (plantar warts).

When to Consider Wart Removal

Cryotherapy is often unnecessary for wart removal because many warts go away on their own; however, some warts can persist for months or even years. Also, while warts are usually painless, they can potentially cause discomfort if they develop in a sensitive area of the body, such as the bottom of a foot. Finally, because HPV is easily spread through direct contact, it is possible to infect others by sharing towels and other personal items, and also to infect other parts of the body by touching a wart and then touching another area of skin. For all of these reasons, it’s best to consider removing a wart soon after it appears.

What Does Cryotherapy Involve?

Cryotherapy is a relatively quick and simple procedure that involves the application of a very cold substance such as liquid nitrogen directly to a wart. After the skin is frozen, a blister will form underneath the wart. As the blister heals and new skin forms, the skin on top of the scab (including the wart) will typically peel off within one to three weeks. Sometimes, more than one treatment is required to completely eliminate a wart.

During cryotherapy, the skin in the treatment area may itch, sting, or burn, and afterward, it may be red, swollen, and sore. While true scarring that involves deep layers of skin is unlikely, cryotherapy may leave a behind small area of pale, discolored skin.

If you’re a member of Optimum Direct Care, you can have your wart evaluated and treated by our board-certified family practice physician, Dr. Toni “Muzzi” Muzzonigro, as part of your membership. When appropriate, Dr. Muzzi performs cryotherapy in her office in Orlando, FL. Contact us to learn more.

“Our family highly recommends Dr. Muzzi and ODC. They feel like our extended family. ”

“The switch to Dr. Muzzi took some getting used to. I am not accustomed to Doctors actually calling me back promptly nor spending quality time with me analyzing my complete medical make up. In this medical era of “get them in and get them out quickly”, her approach is professionally refreshing.”

Contact Us — Take Your First Step on the Path to Optimum Health!